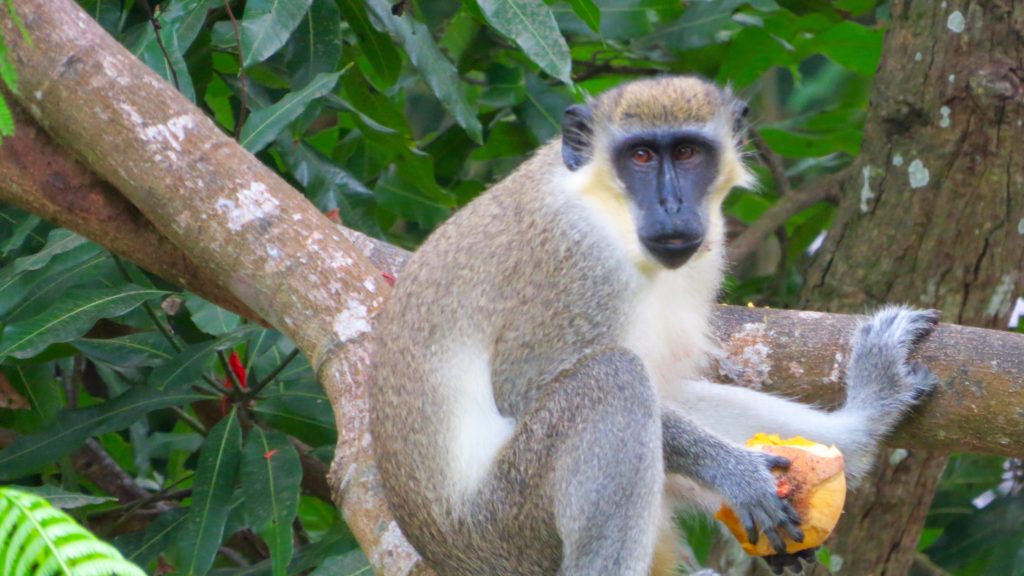 Every morning, a troop of monkeys assembles behind our cottage at our plantation resort in St. Kitts to eat fruit and play in the tropical trees that grace the grounds.  Here, I watch a monkey settle on a perch in the mango orchard to sample the summer fruit which he, like other monkeys, will discard after a few bites.  But, the monkeys are not native species to the island.  The French brought the African Green or Vervet monkeys to St. Kitts from Africa during the 1700’s.  But, Vervet monkeys are so prolific that today there are more monkeys than people living on this lush green island and people argue that they are wasteful and destructive.  I take this photograph of the green monkey, sitting in a tree in an orchard of discarded partially eaten mangos while taking my daily morning walk.  Although I enjoy watching the monkeys romp and play, their excessive population and wasteful eating habits remind me that there are serious problems and environmental damage done by non-native animal species that have been transported by man and left to reproduce in distant locations all over the world.  With this global photo story, I salute the modern management of wildlife to stop the practice of exporting animal species from their native environments, where they live in balance with natural predators, to other places around the world where they may multiply in excess to harm the ecosystems, compete for food, and imbalance the natural order of a stable population of indigenous species.